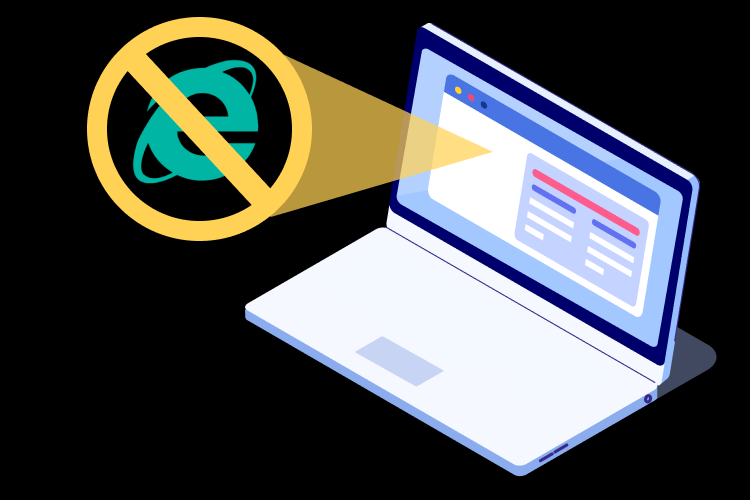 The case against Internet Explorer, or Why we’re showing IE11 the door

Though the default web browser of many firms to this day, Internet Explorer 11 was never really fit for purpose.

Rife with security flaws and incompatibilities with the most basic of modern web presentations, it was behind its time when launched in 2012.

In this blog post by our Head of Product, Jonathan Hyde, we discuss why Legl is putting priority on customer experience and security by ceasing support of Internet Explorer 11 in January 2021.

900 million pairs of eyes were watching as a team of athletes lit the Olympic torch to start the 2012 Olympic Games in London.

Half a world away, at Microsoft’s office in Redmond, Washington State, not far from Seattle, hundreds of pairs of eyes were reading thousands of lines of code as teams of software engineers were working hard on the next big release of their flagship web browser, Internet Explorer 11.

The real world was a different time and so was the web.

Just a month prior, in May 2012, Microsoft’s was officially no longer king of the browsers. They were now in new territory, under pressure to play catch up with technologically superior competition.

Apple’s Safari, Google’s Chrome, Firefox and Opera were all releasing new versions of their browsers much faster than they were, some on a near weekly basis. Microsoft still bundled their browser into the Windows operating system and with Windows 8 shipping the next year, the race to finish it was on.

During the prior three years, since 2009, the web had seen a period of very sudden complexity growth. It had transitioned quickly from being largely static content, to rich media interactions, audio and video streaming for the first time.

For a beautiful illustration of the explosion of new technologies during this period, it’s worth taking a moment to explore The Evolution of the Web.

These new technologies enabled developers to create websites which had elements you could “drag and drop” around the page, new animations, gradients and transitions.

The big problem for the teams at Microsoft was these new web technologies were emerging faster than they could incorporate them into their browser.

When to stop and ship They had to decide what went in and what didn’t. Today, in 2020 we’re still living with the decisions they made back in 2012.

The teams building IE11 had to choose which of the over 80 new web technologies being standardised at that time they would support. This is not to mention continuing to develop standards of their own they wanted the web to adopt.

They didn’t have time to build everything. In the end less than ¼ of the standards being adopted by other browsers went into IE11 and the teams packaged it up and released it with Windows 8.1 in October 2013.

Internet Explorer remains locked, a frozen view of the web and the web has continued to evolve. Since its release there have been another 270 distinct web technologies standardised and adopted into widespread use.

IE11 isn’t only used to browse the internet, however.

Software applications developed for the Windows operating system can use IE11 as their ‘user interface’. This shortcuts the work the developers need to do to get their application into use.

The downside tends to be that they will build their application to work specifically with the way Internet Explorer works. This means unfortunately you can end up with some software applications that require a fixed version of a web browser to run.

At Legl we appreciate we exist inside an ecosystem that needs to make space for applications that law firms still rely on to run their businesses.

Law firms broadly run their businesses on Microsoft’s technology and operating systems so the browser that comes packaged with that operating system is generally provided to do everything from access internal systems to the firm as well as access the wider internet.

System admins have, in the past, been wary of granting more than one browser on the PC, citing security concerns they have kept it locked to only the browser shipped with the operating system and functioning for all their internal application needs. This reduces the need to test internal systems on a piece of software that is being constantly updated at any time.

We would like to appeal that a different approach is now needed to help law firms move forward and help their staff access the internet in a safe and efficient way. Give your teams access to at least one modern browser alongside IE11.

Encourage and train your staff that IE11 is there to maintain access to their internal applications only. The other browser is there to access the internet.

Senior people at Microsoft, on its own blog, are now stating clearly they consider Internet Explorer to be now only used as a “compatibility solution”. They consider using IE11 to access the internet be a “peril” to a business.

Microsoft itself has already started to remove support for IE11 from its own platforms, MS Teams will drop support for it next month with support for Office 365 ending later in 2021.

Major security vulnerabilities exist in IE11 which Microsoft will not fix because they consider the browser to be obsolete.

For example, remote attackers can access local files on a computer. Not only this but IE’s security alert system can be disabled, leaving the person using the computer completely unaware their files are being remotely accessed. Law firms should take seriously the prioritisation of ensuring all their staff have access to an up-to-date browser.

Whether Chrome, Firefox or Microsoft’s Edge, restrict usage of any version of Internet Explorer to only where internal software still absolutely requires it.

Their staff will see a sudden and dramatic improvement of their experience of using the internet.

Pages will generally load 3-4 times faster on the same computer, reduced issues using major websites and compatibility with all major web platforms like Microsoft Teams, and other services. It will also increase the security for your teams and by association, your clients.

As of 1 January 2021 Legl’s web tools will no longer actively support IE11 and other very old browsers.

Our desire to bring innovation and a great experience to our tools is incompatible with continued support of this old browser.

As such all access to our platform will be warned that from January, the functionality of both our firm facing tools and those serving your clients, for their security, will not support older web browsers.

Customer ExperienceDesignFraud PreventionProduct
We use cookies on our website to give you the most relevant experience by remembering your preferences and repeat visits. By clicking “Accept”, you consent to the use of ALL the cookies.
Cookie settingsACCEPT
Manage consent